Audition for Falcon's Eye Theatre's Productions of "Antigone" and "The Tempest" 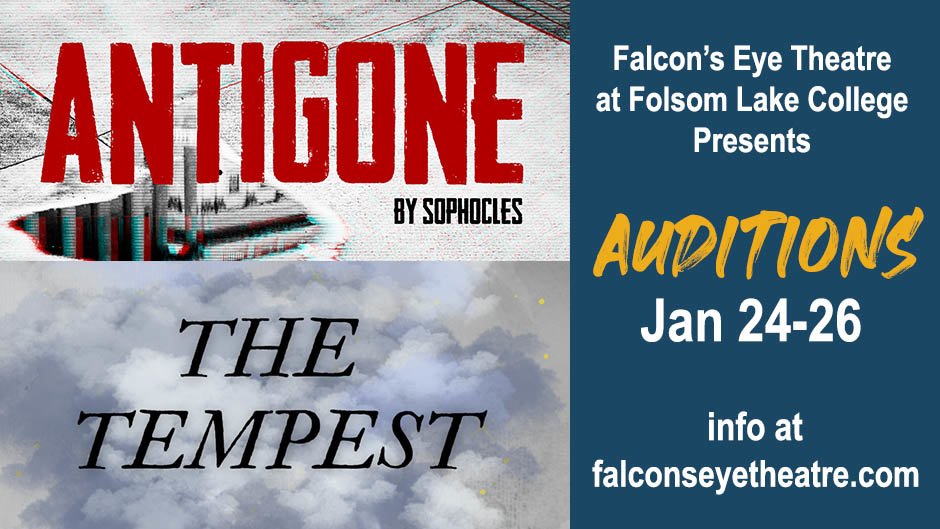 Folsom Lake College's Falcon's Eye Theatre invites students, employees, and actors from the community to audition for two spring productions, Antigone by Sophocles and The Tempest by William Shakespeare, on Tuesday, January 24, 2023, from 6:30 to 10:00 pm (by appointment only), at the Harris Center for the Arts in the Drama Lab (PAC-1170).

At the climax of a bloody civil war that pits brother against brother, both are killed while struggling for control of the nation. With both men dead, their uncle takes control striving to steer the country back to civility. He bestows public honors upon the heroic brother and orders public disgrace for the traitorous brother's lifeless body. The story follows their sister, Antigone, as she goes against the commands of her uncle and attempts to bury the body of her brother, placing her brother above human laws. Antigone will be performed April 14-30 at the Harris Center in Stage Two.

“O Brave new world, that has such people in it!” Shakespeare’s The Tempest is a romantic tragi-comedy with a wide range of serious and comic characters. Prospero, a wizard of the island, has conjured a storm with the help of Ariel, a fairy, to crash a ship carrying corrupt royal passengers. Prospero plans to use his magic for revenge as he was exiled by these people in his former life. Unexpectedly, Prospero’s daughter Miranda falls in love with Fernando, the prince who was aboard the ship. The whole story takes course in a single day as Prospero must contend with the unexpected consequences of his need for power, control, and revenge. The Tempest will be performed May 11-14 at David Girard Winery in Placerville.

Open Monologue Auditions: Tuesday, January 24, 6:30 to 10:00 pm (by appointment only). To schedule your audition, fill out the online form by clicking on the button below.

Audition check-in will be in the Drama Lab (PAC-1170) at the Harris Center for the Arts on the Main Folsom campus (view map).

Monologue Auditions: All auditioners must sign up for an open monologue audition slot, even if you have performed in Falcon's Eye productions in the past. Please prepare an approximately 1-minute classical monologue written by Shakespeare. It can be either comic or serious. The monologue must be memorized.

Headshot and Resume: Please bring a resume and headshot (if you have one). You may email this ahead of time, if you prefer, to Jennifer Wallace at wallacj@flc.losrios.edu.

Call-back auditions will be held Wednesday, January 25 and Thursday, January 26 by invitation only. Your callback time could be anytime between 6:30 and 9:30 pm. Callbacks will consist of cold readings from the text. Therefore, it is recommended that auditioners be familiar with the story of Antigone and/or The Tempest before auditioning.

Rehearsal Dates: Monday, February 6 through Thursday, April 6, 2023. Rehearsals will be conducted in person on campus at the main Folsom campus. Typically, rehearsals will be Monday through Thursday from 6:30 to 10:00 pm. Additional rehearsals might include weekdays and/or weekend days/nights. Minor conflicts with these dates are permissible. Be prepared to provide your complete calendar of availability at the first audition.

Technical/Dress Rehearsal Dates: Friday, April 7 through Thursday, April 13. These rehearsals are not optional; attendance is required.

Performance Dates: Friday, April 14 through Sunday, April 30. Performance calendar will include Thursday, Friday, and Saturday evenings and Sunday afternoons. Subject to change. These dates are not optional; attendance is required. School excusals are available for conflicts with classes.

Rehearsal Dates: Friday, February 3 through Thursday, May 11, 2023. Rehearsal will be conducted in person on campus at the El Dorado Center in Placerville. Typically, rehearsals will be Monday through Thursday from 6:30 to 9:30 pm.

Dress Rehearsal dates: Tuesday, May 9 through Thursday, May 11.